J.J. WATT TO THE CARDINALS

After announcing it via Twitter, J.J. Watt is now an Arizona Cardinal.

Watt, former Houston Texan defensive end, became a free agent after the 2020-2021 season. There was lots of speculation as to where the 31-year-old was going to land, but he announced via Twitter on March 1, that he was going to the Arizona Cardinals. 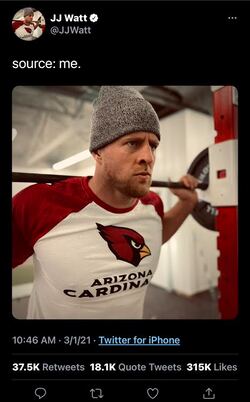 ​Photo taken from J.J. Watt's Twitter
His wife, Kealia, is an American soccer player who plays for the Chicago Red Stars. There was some speculation that he was going to sign with the Chicago Bears, well at least by me and my hopes for it, to be closer to his wife, and because he admits that he loves the food in Chicago.

Watt signed a two-year contract with the Cardinals, guaranteed $23 million but could pay up to $31 million. He said the all the signs just kept pointing to Arizona. He mentioned that he likes the young talent that is one the team, that is the quarterback.

Kyler Murray, only 23 years old, is the quarterback of the Arizona Cardinals. Watt said that he believes in Murray and that is the reason why he is going to play for the team. This won't be the first meeting for the two, though. Murray and Watt met back in 2015 when Murray was named the Gatorade High School Athlete of the Year.

Watt will continue to wear the no. 99 as he did in Houston, though it was retired for the Cardinals. Marshall Goldberg wore that number while playing for the Chicago Cardinals (1939-1943) and it was retired in his honor. But his daughter, Ellen Goldberg Tullos, gave Watt permission to wear the number for the upcoming season.

When Watt was told he can wear this number, he said that he wanted to donate to the Marshall Goldberg Fund for Traumatic Brain Injury Research.

The NFL schedule for the 2021-2022 season will be announced during the second week of May.